For any regular visitors to Murderati, it’s difficult if not impossible to follow up from Gar’s post yesterday. I had been contemplating two subjects for my blog today — both very different from one another (one was ‘failure’ and what it means and the other was my complete inability to get Christmas cards out on time…actually maybe they are related). However, I didn’t feel that either of those subjects was a fitting ‘follow-on’ from Gar’s amazing post.

So, I’m sticking with the theme by talking about Australian gun laws. I guess as a way of saying ‘this is what it would look like’ if America ever did change its (wicked) ways. Plus Gar’s post inspired me to explore things a little more.

The first thing I discovered was that Aussie gun laws have gone through a massive change — and it was in response to a spree killing. Specifically, in 1996 gun laws were reviewed following the Port Arthur Massacre. I should say, that gun control wasn’t really on the radar in Australia before that, because we’ve always had a relatively low violent crime rate plus we have a long history of low firearm use and gun legislation (off and on, and different for the different states). However the state laws were aligned via the 1996 National Agreement on Firearms. But the fact that gun laws haven’t been a constant source of debate does make us very different to America.

Here’s what it’s like in Australia. I’ll start with a personal experience.

I grew up in Melbourne (population 4.1 million, Australia’s second largest city) and had never seen or held a gun until I went to a firing range as research for my Sophie novels. So I was thirty-five years old the first time I saw a gun. Could this be said for many Americans?

According to Wikipedia, 5.2% of Australians currently own a gun. Under the current legislation, you must get a license to purchase a gun, and there’s a mandatory 28-day delay before the first permit is issued. You also must have a “genuine reason” to own a gun and it must be related to pest control, target shooting, hunting, etc. Self defense is NOT considered a genuine reason.

According to Wikipedia, 25% of Americans currently own a gun and about half of the entire population has lived in a household with a gun. This is something I can barely comprehend. So how many thirty-five year olds in America would never have even seen a gun? Not many, I guess. If any.

For most Australians, guns just aren’t part of our lives. We don’t own them, don’t see them, don’t want them. And I guess that’s why it’s hard for us to understand the debate in the US.

You might also be interested to know what happened in 1996 when Australia’s gun laws changed. I haven’t been monitoring how far the discussions are going in the US, but I assume people are talking about how, if gun laws were changed, you could get all the guns out of circulation. Well, this is how it worked in Australia.  It was simple: gun owners had a certain amount of time to hand in their weapons and they got money in exchange. This from Wikipedia: “Because the Australian Constitution prevents the taking of property without just compensation the federal government introduced the Medicare Levy Amendment Act 1996 to raise the predicted cost of A$500 million through a one-off increase in the Medicare levy. The gun buy-back scheme started on 1 October 1996 and concluded on 30 September 1997.[23] The buyback purchased and destroyed more than 631,000 firearms, mostly semi-auto .22 rimfires, semi-automatic shotguns and pump-action shotguns.” (By the way, Medicare is our national healthcare system, and it was increased from 1.5% of your wage to 1.7% for the 1996 tax year.)

I guess it would be rude and probably naïve of me to say: ‘See America, that’s how it’s done.’ Not to mention inflammatory. We are very different countries with different histories. But from the outside looking in, it’s hard not to feel disbelief at America’s gun laws and attitudes. I’m not saying Australia is perfect — it’s not. And it’s with great shame personally and as a nation that we have to claim one of the world’s worst spree killings – Port Arthur. However, I do think we’re at least pointing in the right direction.

I’m proud that I’d never seen a gun until I was thirty-five. Proud that I don’t know anyone who owns a gun. And as a mother, I’d prefer my children to have similar experiences. I think it would be great if they only see a gun if they become a crime fiction author and need to do some research. What about you?

When the movie’s better than the book

Filed under: Book reviews,Murderati blogs — Tags: I Am Four, Lord of the Rings, PD Martin, The Hunger Games — PD Martin @ 3:40 am 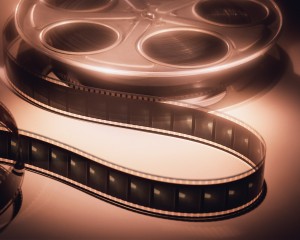 There have been posts on Murderati before about books being turned into films, including David Corbett’s recent post on Cloud Atlas.

However, I’m not setting myself such lofty heights (!). I’m looking at book versus film YA style. You see, the novel I’m currently working on is YA (primarily, at least) and so I’ve been reading in that genre, including some of the breakout hits. Two I want to talk about today are I am Four and The Hunger Games.

So, first off I should say that with I am Four my first exposure was the movie (loved it for the pure escapist, sci-fi, action-packed style that it was). And yes, I know it’s not high-brow. There, I said it. Problem was, the movie was obviously a part one, and ended with a cliff-hanger. So, I  Googled it to see when the next instalment would be out, only to discover there was nothing in the works. After dismissing it for many months (longer actually), I finally decided I wanted to find out what happened. Especially given I wanted to read in the YA space. And while I could have read I am Four, I cheated a little and jumped to the second book, The Power of Six. And this is when I discovered something interesting…the movie is actually better than the book (IMHO) – at least the movie was executed better than book 2 (and book 3, The Rise of Nine, for that matter). Now, we always hear about movies not living up to the expectation of the book, but this was reversed for me. I felt the characters were actually more well-developed in the movie than they were in books 2 and 3, and I found some of the writing mechanics a little clunky. That’s obviously with my author hat on, of course.

At the time I was reading The Power of Six, I was also doing the final stint of my Writing Australia tour, teaching writing. Anyway, one of my slides looked at what makes a book ‘good’. My list includes things like: engaging characters, well-developed plot, writing style and being a page-turner (to name a few).  Funny thing is, the I am Four books are complete page-turners. I finished them quickly and didn’t want to put them down. I may moan about the character development and writing style, but I ploughed through them, eager to lap up the next instalment. They were page turners and so using my own definition they are ‘good’. Yet they failed to tick any of the other boxes.

Move on to the next blockbuster film and trilogy…The Hunger Games. Again, I saw the movie first (really just to see what all the fuss was about) ages ago and then recently as part of my research decided to read the book. And this time I did read the first book. In this case, I have no strong opinion either way whether the book is better than the movie or vice versa. In fact, I think they’re probably pretty equal. But, once again I’m totally INTO the series. I finished the first book and downloaded the second straight away. I’m pathetically taken in by the romance element (I know, I’m hopeless!) and the sense of impending rebellion — I’m dying to see what happens next. I’m now 50% through book 2, Catching Fire. Sshh, don’t tell me what happens.

Another book-to-movie comparison that always comes to mind for me is Lord of the Rings. I actually think Peter Jackson did the most amazing job of adapting those novels. In fact, in some ways the movie version was an improvement (hope I don’t get hate mail over that one!). But seriously, who needed Tom Bombadil??

In today’s Wildcard Tuesday I wanted to look at traditions. I’ve never been the sort of person who was/is ‘traditional’ or who was really into traditions much at all. Having said that, since I’ve become a mother I find myself feeling much more nostalgic (and warm and fuzzy) about traditions.

Two things that have come up recently…

First off, the photo with Father Christmas. It’s that time of year again, when there’s a Santa in every department store. Last week, my daughter raced home to tell me: “Guess what, mum. I saw Santa at Shopppingtown today.” Shoppingtown is one of our closest shopping centres (mall if the language needs translating!). It was also our local when I was growing up and I remember having many photos with Santa there. 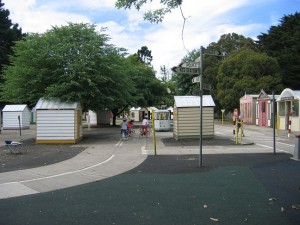 The other nostalgic thing of recent…the Kew Traffic School. This Thursday is my daughter’s sixth birthday, and yesterday afternoon we had her birthday party (actually she’s having three celebrations (!) but this was the party with her friends). Anyway, back in January I booked out the Kew Traffic School on Grace’s request. Yes, she was planning her sixth birthday party soon after her fifth! And yes, you do need to book the Traffic School early for private functions.

Anyway, the Kew Traffic School has many memories for me, and for other Melbournians. You see, it’s been around for ages. It’s basically a mini street system complete with traffic lights, a railway crossing, a roundabout, a few stop signs, a school crossing, giveway signs, etc. I remember going there when I was about eight with school as part of bike and road safety education. I had a ball! You take your bike and helmet and off you go. They also open during school holidays, and you can rent the Traffic School for private parties.

Grace’s party there was a definite success – from all perspectives. From the kids’ perspective it’s a great party. You zoom around on your bike or scooter for two hours and get to eat party food. The parents were pretty happy too, and I had many of them grinning as they were leaving and saying: “They’ll sleep tonight.”

And from our perspective, it was a pretty easy birthday. There’s no real need to decorate the venue (we just did balloons at the entrance) and you bring all your own food in so you get to choose what you want to bring and don’t pay ridiculous prices for it. There’s also a BBQ there, so we had sausages going for the second hour, which were a great hit. Yes, the threat of rain was a problem (no contingency plan) and Melbourne is unpredictable even in December. However, yesterday was perfect weather. Warm and sunny, but not too warm. 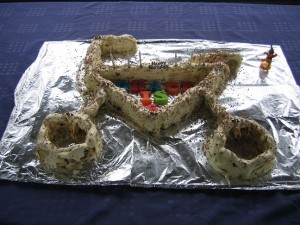 Admittedly, I had it easy – Shane did the lolly bags, the cake (a chocolate ripple cake in the shape of a bicycle) and the sausage sizzle. Some of you may remember the fairy princess cake I did for Grace last year?? This year, Shane was keen.

Anyway, the party was a success and we’ve decided to hopefully hold a party at the Traffic School for Liam when he’s six or seven, too. Although with a May birthday I think it might be too risky!