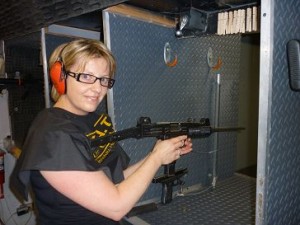 As many of you know, I’m currently working on a new series (very exciting!) and the main character is very different to Sophie – she’s very “dark”, and also used to handling much more than a 9mm.

When on holiday in Hawaii a remarkable opportunity presented itself – a chance to shoot some big-ass guns.

Now, I’m not a toting, carrying, pro-gun kinda girl – and I like the fact that in Australia (and particularly my state of Victoria) it’s hard to fire a gun, get a gun and keep a gun.

Having said that, I LOVE my research and don’t think I can write about a lead character shooting a particular weapon or training with them if I haven’t even held one myself.

I was out for a walk one night in Honolulu — after my daughter was tucked up in bed and my mum was on babysitting duties — when I was handed a leaflet about one of the firing ranges. The basic offer was something I’d done before and could do again in Australia – 22mm, 9mm and a couple of revolvers. Then there was the high-end offering – the Uzi, MP5, HK45, AR15 and the AK47. Could I resist a chance to fire these guns? After mulling it over for a few days, I decided no.

I still haven’t checked if it’s possible in Australia/Melbourne to use these weapons on a range, but I felt sure that it wouldn’t be. After all, you only get three visits to a firing range in your lifetime here before you have to apply for a gun license and even just for a visit you need to lodge paperwork and, from memory, I think a criminal record check is even carried out.

By far the gun with the biggest kick was the last one, the AK47. As instructed, the end of the rifle was wedged into my shoulder and with each shot I could really feel it digging in. It was also extremely loud and I sure was glad of my ear muffs.

So, would I do it again? Perhaps down the track I’ll make another visit to a firing range in the US or here, but for the moment I’ve got enough of a feel for it that I can write it convincingly.

You can see more pics of the guns and me in action at: