Would you kill me?

Okay…so I’m nearly finished the online experiment that is Coming Home – and book 6 in the Sophie Anderson series.

What do you think? Would you kill me? Send me an email at info@pdmartin.com.au or comment below! And as they say…speak now or forever hold your peace.

Well, it’s been a while since my last blog…instead of blogging I’ve been enjoying the Aussie summer. My husband, daughter and I were at the beach for January. Most days were simple: a walk, coffee, playground, relax a little at the house, then a trip to the beach with lots of swimming and sand-castle building (actually, I mostly watched my husband and three year old build the castles). Nights were generally DVDs – Dexter and Breaking Bad, plus several movies. Sound good? It was! The only drawback was that I did get behind on emails, blogging, and other stuff, and had to take breaks to promote Kiss of Death, which was released in Australia and New Zealand 1 January.

Of course, I’ve also been working on Coming Home (www.pdmartin.com.au/ebook), writing one chapter a week. It’s hard to believe I’m now officially over half way through this process. I never know when a book will end when I’m writing it, but at the moment it doesn’t feel over halfway done. However, I’m hoping it is because I kinda need to stick to the 12-week, 12-chapter plan. Mostly because I‘ve started my new project and really need to focus on getting the proposal and first three chapters to my publishers. After all, with summer almost over it’s time to get another paying gig

Fingers crossed my publishers will like the new book…it‘s not an ebook or a Sophie book!!! Shock, horror. It’s been really exciting working on it this past week. For a start it’s written in third person, and it’s much, much darker than Sophie.

Back to Coming Home…well, it’s Friday and I haven’t started on this week’s chapter. How does this happen?? So yet again, I’m flashing back to my school days of late-night cramming. It’s also not ideal in terms of the flow and continuity of Coming Home. I definitely feel it’s time for a good, long edit. But where to fit it in between the new book and other commitments? I’ve already identified some of the key things I’ll need in the edit, such as:

What do you think?

I always do a lot of editing between the first draft and the final draft, so you can expect changes from what you’re reading now and what you’ll read in the final PDF of Coming Home (available two months after I finish the last chapter).

So, I’m off to work on the new book (really need to submit it) and chapter 8 of Coming Home. Wish me luck!

This week’s blog is a little late – but the timing ties in nicely with the work I’ve been doing this week on Chapter 4 of Coming Home. I’ve just finished it!

As you probably know, Coming Home is book 6 in the Sophie series, and I’m writing it online as an interactive ebook.

I’ve made some changes to the format of Coming Home recently:

The new procedure of posting the book chapter-by-chapter has some challenges for me. Already this week I can see edits and changes I’ll need to make. For example, I’ve drafted Chapter 4 with Sophie looking at the most recent victim’s skeletal remains. But I think I may end up having to make the body ‘fresher’ to fit in with other elements of the case and give the detectives and Sophie. What this means is that when you read Chapter 4 this week Sophie’s looking at a skeleton of a boy who was killed six months ago, but when I release the final book this may change!

My other challenge at the moment is that I’m away at the beach, spending 90% of my time on holiday with my husband and three-year-old daughter and 10% of my time writing. I also don’t have Internet down here (except for an hour or two in the local library a few times a week), which means I don’t have access to my usual research materials – being able to email a forensic pathologist while I’m writing and getting an answer back within a few hours or a day, looking up my extensive book collection or spending an hour or two searching for body decomposition states after 6 months in bushland (and whether six months’ decomp is more forensic pathologist or anthropologist). Just your average crime author research!

This may mean even more edits in a few weeks’ time when I’m back into my normal routine.

Aside from that, I’m really enjoying writing Coming Home and being in Sophie’s head again. 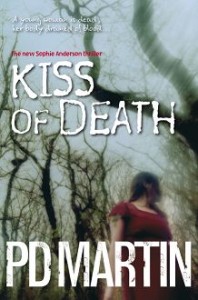 Well, I was planning to blog a little bit today about Chapter 2 of Coming Home – you know, how it was going, what I’d written so far, etc. One problem with that: I haven’t started it yet! I feel like a naughty child confessing to something…well, naughty.

Rest assured, I will finish Chapter 2 this weekend – but it might be a busy weekend!

I’ve had a lot on though…I uploaded the new women’s safety section on my website – important tips in there, so make sure you read it and keep safe! I also uploaded the first chapter in Coming Home and the questions for Chapter 2. Then things kinda stalled.

I also received my author advance copies of the Aussie version of Kiss of Death and I’m running a couple of competitions for Aussie and NZ readers – one for my web subscribers and one at my Facebook page.

Plus I’ve decided on the topic/character for my next book (after Coming Home) and it’s NOT a Sophie book. I know, big news. More on my next project later – much later.

But for now I want to leave you with a safety tip: Be hyperaware of your surroundings and actions when in parking lots – it’s one of the places women are most likely to be sexually assaulted.

Tips for parking lots
When you park your car in a lot, park it near the entrance/exit and when you’re making your way to your car, have your keys out and ready. Don’t walk across the lot rummaging through your bag or on your mobile/cell phone. Instead, give your surroundings 100% of your attention. If a van is parked next to your car on the driver’s side, you may want to enter your car through the passenger side. Offenders have been known to snatch women and throw them in a neighbouring van – for the offender, it’s quick and easy. See my safety tips for how to stay safe while getting into your car, while in your car, and other car-related safety tips.

On Tuesday this week I started writing the new Sophie Anderson book, Coming Home. Check out my YouTube video to see how it looked after 24 hours: http://www.youtube.com/watch?v=SLG7C0Wzb7I

As the voting deadline got closer, a clear leader began to emerge for my first question: What sparks Sophie to investigate her brother’s murder? And it seemed that option A had it: After 28 years with no abductions or murders similar to John’s a young boy is abducted (or found dead) in very similar circumstances.

My personal preference would have been the second option (a similar murder in the US) just because I felt it was the most complex and would give me greater scope as I moved forward with the book.

Having said that, I still had lots of fun writing the first chapter! The chapter’s not quite finished yet (well, I wrote a first draft on Tuesday and haven’t had a chance to do any work on it since) but I hope to finish it off tomorrow.

I also drew the winner of the first chapter competition – Taina. You can see that at:  http://www.youtube.com/watch?v=urlw4ypXDYc However, I’m afraid Taina may only get the chapter 24 hours or so before everyone else, as I’m running a little late. First week on the job and I’m lagging behind…not good. Still, I can always ‘owe’ Taina a free chapter read for chapters 2-12.

Don’t forget, I’ll be posting chapter 1 and the questions/voting for chapter 2 at 9am (Aussie time) on Monday 14 December. Mmm…I better get editing/writing!

The countdown is on

With only a few days to go, it seems the basic premise for the first chapter of Coming Home has been decided. Thanks to everyone who’s voted so far!

What sparks Sophie to investigate her brother’s murder? Thirty percent of voters went for: After 28 years with no abductions or murders similar to John’s a young boy is abducted (or found dead) in very similar circumstances.

The two options coming in equal second are only at 18%, so I can’t imagine they’ll topple option A. Which means it’s time to start thinking about this new murder in Australia. Will it be in Victoria again? Shepparton? How will the murder be similar to John’s and will there be any differences? I still won’t start writing – I’ll wait until the voting officially closes, just in case – but I can now start thinking seriously about Chapter 1!

I’m really looking forward to Tuesday and starting the next instalment in the Sophie series. It’s been a little longer than normal between projects/books for me this time and I can feel myself getting itchy hands. It’s funny, if I haven’t written for a while I literally find myself typing in the air, wanting to move my fingers across a keyboard as quickly as possible. And Tuesday’s the day!

So at 9am (well, after I drop my daughter off at my mum’s) I’ll be hitting the new book! I might even video the start.

Quaking in my boots

You guys are deciding Sophie’s fate. That’s right, you get to vote for what’s going to happen in each chapter of my next book. Ahhhh!!!

You’ve probably never thought about the decisions an author makes when writing a book. From the get-go, we’re making decisions – some big, some small. In terms of crime fiction, it’s things like:

These are massive decisions, plus along the way an author is constantly deciding what will happen next, how the crime will be solved, what clues will be left and how the main character will develop.

This week I launched Coming Home – I describe it as an interactive ebook, in which participants get to have their say in the plot and characters. And it’s extremely scary for me that these decisions are largely out of my hands. Sure, I nominate the options, but ultimately you decide.

It was less than 48 hours ago that I “launched” and I’ve found myself constantly clicking on the “show results” section for each of the initial two questions. I have my favourite/s, of course, but majority will rule.

You vote, I write it. I’m a slave to your whims! And I’ve already had one suggestion for a future question: “Vote for lesbian love scene” Yes or No?  As you may have guessed, this was suggested by a man!

Anyway, this is a scary process for me and I’ll probably blog about my progress each week. Who knows how the book will unfold. I can tell you this: I haven’t planned any follow-on chapters/options/questions. I have NO idea where this is going.

No wonder I’m quaking in my boots.