September is already a month of celebrations for me…and we’re only five days in! And maybe that’s why this blog is a little late, going up on 5 September instead of 1 September.

The first celebration was literally on the first of the month, when a large group of people gathered in the Yarra Valley to celebrate my dad’s 70th birthday. It was a fabulous day and Dad had people from all different aspects of his life there.  We had a lot of speakers – yet everyone was so unique with wonderful insights that the day didn’t feel ‘heavy’ with speakers. In fact, it was fascinating. We had 14 people all up!

And 1 September was also Father’s Day, so we started the day with breakfast for my husband and presents from the kids. 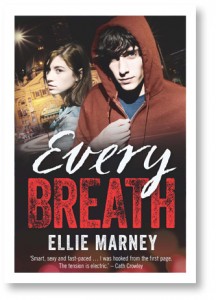 September is also another big celebration for me. As some of you know, in 2010 I started teaching at Writers Victoria. This month marks a huge milestone in my role as a writing teacher, with one of my students entering the ranks of  ‘published author’.   Congratulations to Ellie Marney on the release of her debut young adult (YA) novel, Every Breath – the novel she was working on in my 2010 class!

I have to say, it’s extremely rewarding to see one of my students’ manuscripts come to life not only on the page, but then on the bookshelf. The official launch is next week, but it is in bookstores now. Congratulations to Ellie, and I hope she’s the first of many of my students to break into this crazy world!

About Every Breath (from the back of the book)

What if Sherlock Holmes was the boy next door?

Rachel Watts is an unwilling new arrival to Melbourne from the country. James Mycroft is her neighbour, an intriguingly troubled seventeen-year-old genius with a passion for forensics. Despite her misgivings, Rachel finds herself unable to resist when Mycroft wants her help investigating a murder.

And when Watts and Mycroft follow a trail to the cold-blooded killer, they find themselves in the lion’s den – literally. A night at the zoo will never have quite the same meaning again…