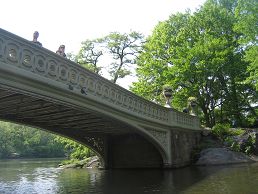 Okay, I’m officially blogging. That’s right, I’ve joined the ranks of the switched on, technically savvy communicators who blog. Of course, I don’t really have a clue what I’m doing, but here goes…

Wow…I have been busy.

I’ll talk about the panel at EWF next week, but for now more on the trip. The pic on the left was taken in Central Park.

First stop, New York, New York…so good they named it twice. Spent five days there, mostly just hanging out, but I also managed to catch up with my agent and my new US editor and had a fantastic chat over lunch. Yum!

Then it was down to some good friends in North Carolina (near Raleigh). From there, we also went to Myrtle Beach and Washington DC. My daughter loved the lazy river in the Myrtle Beach hotel (we actually all had fun in that, but it sounds much better if we were just in it for the 2yro) and I got to the Spy Museum in DC, which was really cool.

Then it was up to Wakefield, Rhode Island to visit my best friend (who’s married to an American). It was so great to see her – best friends rock! We’ve known each other since I was four and she was five.

Then back to NY for a couple of days and then home. We had a ball…as did the mice who house-sat for us.