The allure of the short story 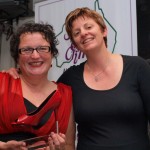 Today I’d like to welcome Aussie author Angela Savage to my blog.

I’ve met Angela a couple of times on the mystery ‘scene’ and ran into her again at Sisters in Crime Australia’s Scarlet Stiletto Awards – Angela won the top honour of the night and I was there as the official presenter. You may also recognise Angela from my ‘photoshoot to kill for’ blog.

Given Angela’s first novel was written after an award-winning short story introducing her main protagonist, and that she’s written extremely successfully in both the short and long form, I asked Angela to blog about the short story and the novel. What attracts her to both forms? Does she approach them with a similar mind-set?

I’ve entered the Sisters in Crime Australia Scarlet Stiletto Awards short story competition twice, once in 1998 and again in 2011.

The first time I was an unpublished writer with an abandoned manuscript burning a hole in my filing cabinet. Short story competitions provided me with focus, opportunities to practice my craft and try something new. The Scarlet Stilettos held the particular appeal of being exclusively for women writers, with stories required to have an active woman protagonist.

In what was my first foray into crime fiction, I submitted a story called ‘The Mole on the Temple’ about an Australian expatriate detective called Jayne who exposes a card scam in Bangkok. 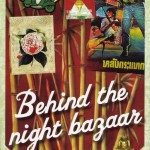 My story won third prize. More valuable than the prize money was the confidence this gave me to persevere with both the crime genre and the main character. Jayne went on to acquire the surname Keeney and became the hero of my first novel Behind the Night Bazaar published in 2006. The second book in the Jayne Keeney PI series The Half-Child followed in 2010 and I’m currently working on the third, working title The Dying Beach.

Funnily enough, Behind the Night Bazaar started life as a short story that just kept growing. I’ve since ‘cannibalised’—to use Raymond Chandler’s word—several of my early short stories for scenes or subplots in my novels.

I’m not the only author to have kick-started my writing career with a prize at the Scarlet Stilettos. So far 15 women, including category winners like me, have gone on to publish novels. But I’m the first established novelist in the 18-year history of the Scarlet Stiletto Awards to return to the scene and take home the coveted Scarlet Stiletto trophy. 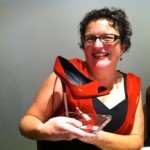 So what made me decide to enter the competition again after a 13-year break?

Part of the motivation stems from a crisis I had earlier this year about whether I could call myself an ‘Australian writer’, when everything I’d written was set in Thailand in the 1990s, albeit featuring Australian characters. I challenged myself to set a story closer to home and the result was my winning entry for the 2011 Scarlet Stilettos, ‘The Teardrop Tattoos’ set in contemporary Melbourne. The plot, involving a restricted breed dog, became inadvertently topical when a four-year-old-girl was tragically killed in an attack by a pit bull terrier only weeks after I submitted the story to the competition.

As in 1998, the short story form gave me an opportunity to try something new. But this time around I have no desire to develop the characters or plots into a full-length novel.

With novels you can loiter a little, while the nuances of the story and characters play out. Short stories have to maintain the pace or they’re dead in the water.

Secretly, like an actor who longs to direct, I’d really like to write songs—to tell a whole story in three or four verses and a haunting refrain.

I’ll just have to keep practising.

Angela’s first book, Behind the Night Bazaar, won the Victorian Premier’s Literary Award as an unpublished manuscript in 2004 and was shortlisted for the Ned Kelly Award for Best First Book in 2007. Her second novel, The Half-Child was shortlisted for the Ned Kelly in 2011 for Best Fiction. The Half-Child is available in Kindle version on Amazon or in hard copy through Text Publishing.